You are being lied to, clumsily. Redux.
My seething hatred of the American Junta still, you know, seethes. Occasionally it froths a bit, and it is known occasionally to erupt, after which it drips slowly down my leg. Most of the time, it merely simmers, on a low boil, until I see something like this, and, well, then I’m off and seething again. 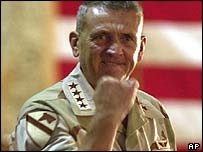 “We were not lying,” a Bush administration official told ABC News. “But it was just a matter of emphasis.”

Why
Not
Go
f–k
Yourself?

I might be lying to you too, of course, and in fact I probably am : but at least it’s moderately more artful than the cheesedick trailerpark celebrity faux-cathexis that serves for discourse on the tee-vee. 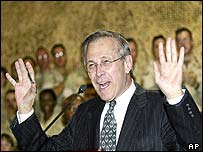 You have been lied to, and it’s a lovely feeling, that they should still care enough to try, isn’t it? But they’re clearly not trying very hard. Or they’re trying their damnedest, but they are so ham-handed, half-witted, blinded by hubris, too busy slapping each other on the back while carefully wiping the faeces off each other’s dicks after the latest washingtonian clusterf–k that they actually think the dog-and-pony show is fooling people.
Of course, inside the borders of their mighty nation, they’d be right, to a surprising extent. Pity, that.
You are being lied to, clumsily.
But you knew that already, didn’t you?
OK, I’m done. That should hold me for week or so.
Edit : No, I was wrong. One more thing.

I got my mojo working and I thought you'd like to know.

This is Emptybottle.org, the place on the internet where the man who out of sheer inertia if nothing else continues to be known as stavrosthewonderchicken occasionally writes things and posts stuff and like that.

You are most welcome, friend.

The Life of a Crate

Dick of the King 2: Time Spangler

Fortresses as far as the eye can see

DOOMguy Knows How You Feel